I recently completed a website for Pauline Tully TD, and it got me thinking. Prior to her new website, Pauline's assistant was using wordpress.com to publish the content of her Dail contributions, and share them on social media. He will continue to create this Political Website Content on her new website. Another TD recently told me that they think a website is a great idea (they're right, it is) but the reason they didn't want one is because of the added workload.

By using "the Pauline Tully" method, or employing FutureProof Digital to take care of this for you, the workload can be greatly reduced, and for the TD themselves there doesn't need to be any extra at all. It's simple; get someone like me to build a website, then, using the Oireachtas website, publish each speech or contribution as a post. This can be done either by staff or by keeping the web design agency on to do it. Let's take a closer look...

We use SiteGround for all our Web Hosting, we think you should to. Check them out...

We use SiteGround for all our Web Hosting

We think you should to. Check them out...

"Websites run by agencies of the state are not always the best, some are really terrible, but oireachtas.ie is most certainly an exception. Every contribution made by every TD and Senator, going back decades is available, and the search and filter options are excellent."

This is the webpage that makes the process possible, and creates a copy and paste recourse for populating your website with fresh engaging content…

Websites run by agencies of the state are not always the best, some are really terrible, but oireachtas.ie is most certainly an exception. Every contribution made by every TD and Senator, going back decades is available, and the search and filter options are excellent. What concerns us here is the option to filter by member; simply type the name into the box and click “update list.”

I know Richard Boyd Barrett spoke in a recent housing debate, so we’ll use him as an example. The list will re-populate with only the contributions by Richard, and 10 items down, Thu, 25 Mar 2021, Residential Tenancies Bill 2021: Second Stage (Resumed).

It’s that simple. Click view, and not only will you be taken to the entire text of the debate, you will be scrolled down the page to the first contribution, by your chosen representative, during that debate. Now you have 90% of the text copy for a piece of Political Website Content. Click below to read the text…

This Residential Tenancies Bill is, for the most part, a deception and a fraud. It is an attempt to suggest the Government is trying to protect tenants in the midst of the Covid pandemic when, in reality, apart from a tiny cohort of tenants for whom protections will be extended, literally a few hundred tenants, the Government’s real intention is, as of 5 April, to allow vulture funds and landlords to evict people in the midst of a pandemic purely on the grounds that the 5 km rule has changed. That simple fact seems to escape Deputy McAuliffe and it seems to escape the Minister, despite the fact I have repeatedly cited for four years now, including on multiple occasions with the current Minister, the example of St. Helen’s Court in Dún Laoghaire. It is just one example of what happens when tenants are persecuted for profit by vulture funds and of the failure of the Government and successive Governments to put in place protections for those tenants, who have not done anything wrong.

They have not committed anti-social behaviour and have always paid their rent. They simply have the misfortune to live in an apartment complex, many of them for up to 20 years, which was unloaded by NAMA into the hands of one vulture fund and then another, as happened with many properties across this city and country. These vulture funds have persecuted the tenants for profit and for no other reason. First, they tried to put up the rent by 60% but failed. Then they tried to evict tenants on the grounds of substantial refurbishment when, of course, there was no need to evict them to refurbish the complex. Next they tried to evict tenants en masse. Ten have effectively been driven out over two years, persecuted by anxiety and hardship. The funds then tried to evict the remaining ten tenants but luckily, they fell foul of the Tyrrellstown amendment. Weeks later, they came back and said that they could not evict ten tenants because of the Tyrrellstown amendment but would evict eight. It is not as if anybody believes that the other two evictions will not follow immediately afterwards, given that the fund tried to evict all tenants on two previous occasions. I went to the RTB with those residents on numerous occasions. The barrister representing Mill Street Projects Limited, the vulture fund involved here said “This is ugly. This isn’t very pleasant but our owner has to maximise the value of the property”. The fund has sat on the ten apartments from which it managed to drive tenants out, through sheer anxiety. Those apartments have been sitting empty for two years. As of 5 April, the remaining tenants will have ten days before they are evicted in the midst of a pandemic.

The preamble to this Bill says that the Government does not want to worsen the public health situation and that evictions could contribute negatively to the transmission of Covid-19 and of course they could. That is absolutely right. These people will be, and some are already, knocking on the door of Dún Laoghaire-Rathdown County Council and engaging with its homeless services. We are talking here about families and individuals, some of whom are pensioners but the Government is not protecting them, which is what it should be doing. Neither is it protecting thousands of others like them. The suggestion is that when the 5 km restriction is lifted, it will be easier for them to find alternative accommodation in south Dublin or even in Wicklow or Wexford at the rents they are currently paying, of approximately €1,000 per month. These rents are high but what will they go up to, given that average rents in the area are approximately €2,000 to €2,200 per month? Where are these people going to find somewhere to live? The Government is failing to protect them and many other tenants like them. It is not extending protections to such tenants.

We have tabled amendments to the Bill that provide for Covid-related protections to be extended until April 2022 for all tenants who could face eviction through no fault of their own. We have no idea when this pandemic is going to end, particularly given the mess the Government is making of the vaccine roll out. Beyond that, and in the intervening period, our amendments provide that the Government starts protecting tenants, full stop. Why should vulture funds, under any circumstances, be able to evict people just because they want to increase the value of their property? They simply should not be able to do so. Tenants should have security of tenure. Funds can sell or refurbish properties with tenants in situ, which is standard practice across Europe.

This Government is not willing to protect tenants because it has courted, facilitated and encouraged vulture funds and others who want to make profit from property, regardless of the human consequences for those who live in the property. It is absolutely disgusting, frankly, the stress and pressure that residents of St. Helen’s Court have undergone for four years at the hands of vicious, ruthless, inhumane, profit-driven entities. These entities do not give a damn about human beings. I have asked this and previous Governments, again and again, to protect tenants like these but they simply will not do it. It is absolutely enraging, especially when the Minister has the cheek to come in here and suggest that this Bill is protecting a significant cohort of tenants. It will protect the few hundred who can jump through the hoops and show that they haves suffered direct, Covid-related income loss and are on the PUP but the vast majority of people who could face eviction will not get any protection under this Bill and will potentially be thrown to the wolves on 5 April.

I think you’ll agree, that if you were Ricard Boyd Barrett, or the person running his website, (which I’m not by the way… not yet) then this has all the makings of a pretty decent piece of Political Website Content; perfect for updating your email subscribers, perfect for sharing on social media. 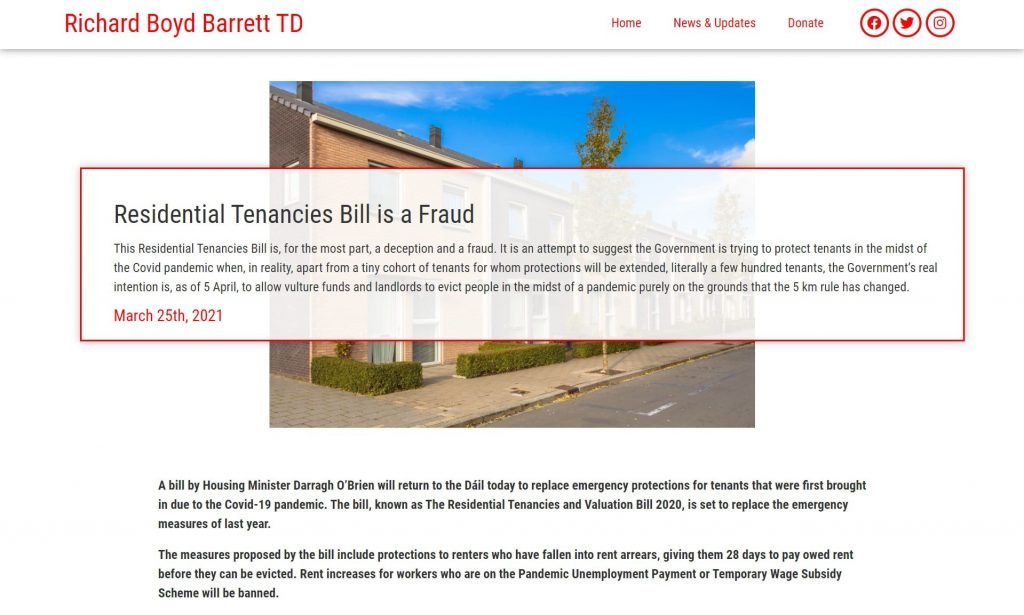 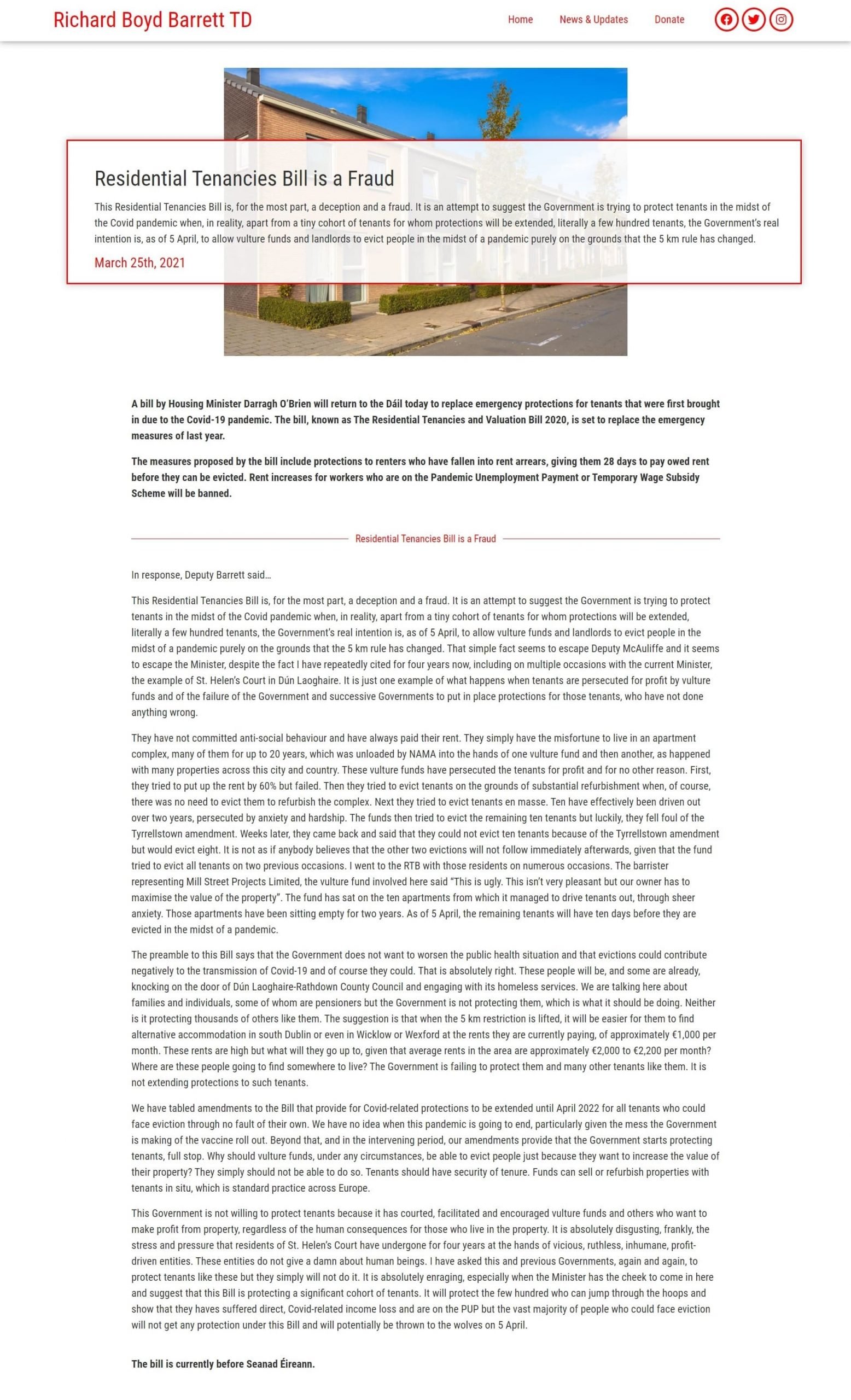 What I’ve created here took less than an hour. I would estimate 2-3 hours to create this piece of Political Website Content in a live situation, when you include some SEO tasks, you can read about these here. Source a high quality image to use, find a stand-out paragraph to use as an extract, write a few sentences about the topic, in this case a housing bill, to use as an introduction, and that’s a basic post complete. There’s no reason why 4 or 5 of these can’t be published each week.

As I mentioned above, this is something you can do yourself or get a staff member or assistant to do. If you have a WordPress website, and it’s been built well, it won’t take you very long at all to pick this up. If you employ FutureProof Digital to build your site, we are very experienced in this type of content, and would be very happy to stay on, for a small monthly fee, to create this content on a weekly basis.

In a previous post, Political Website Design, I spoke of how few of our public representatives have their own website, and how important I think it is that they do. The future of all business in online, and Covid-19 has only served to speed up that trend. The business of politics and getting elected is way behind in this respect. If you launch a website today, you may well be the first in your constituency to do so. You’ll be the first to update voters on regular basis with the work you are doing for them, every day, as their representative. Their is only one opportunity to be the first, to lead the way.

Hi, I’m Adam, thank you for being here at FutureProof Digital. We publish regular content including blog posts, guides, reviews and updates on our latest projects. To stay up to date with everything we publish, sign-up for the newsletter. 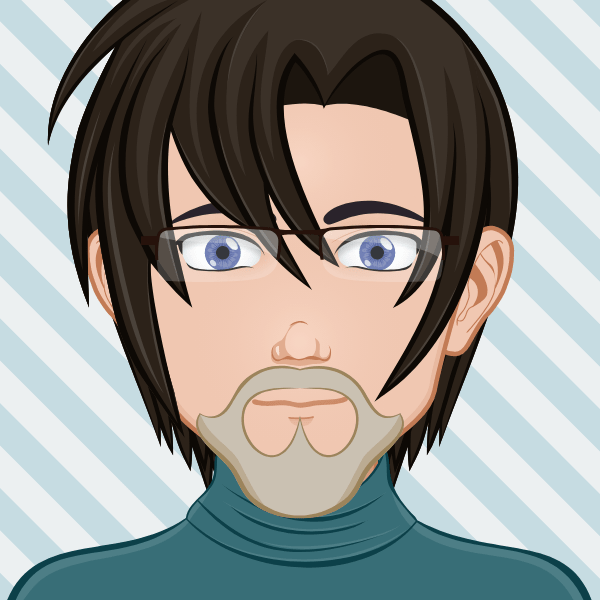 If you run a business and you need a website (pro tip = you do) or your current website doesn’t look the way you want it to, function the way it should or perform how you need it to, get in touch. I don’t charge a penny for consultation, so finding out about what your business needs and what can be achieved for your budget is completely free. Use this form… we can meet in person, have a phone or Skype call or use email, it’s up to you. 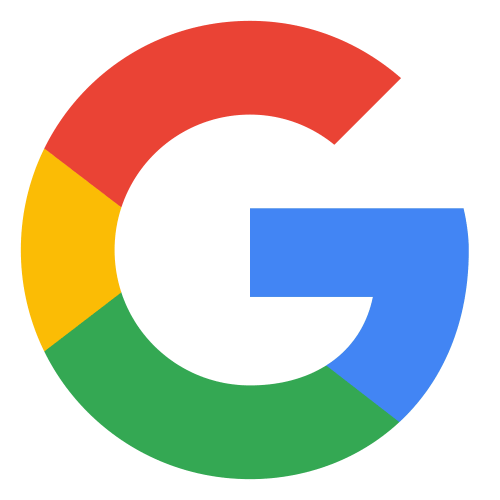 If you love your new website and you enjoyed the experience of working with FutureProof Digital, please think about leaving a review and letting others know.